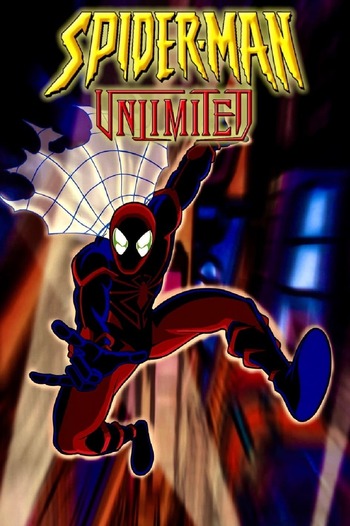 Spider-Man Unlimited is an animated television series, running from October 1999 to March, 2001 on Fox Kids. A total of 13 episodes, it was a sequel series of sorts to Spider-Man: The Animated Series. It sees Peter Parker forced to go to another "Counter" Earth after John Jameson’s ship gets attacked by Venom and Carnage and as per Spidey’s luck, the hero gets blamed for it. After "borrowing" a suit made of nano-machines, Spider-Man goes to Counter-Earth to rescue Jameson and clear his name.
Advertisement:

Upon getting to Counter-Earth, Spider-Man discovers that a tyrant called the High Evolutionary has made himself at home and created Beast Men that run the planet, and normal humans are treated like second class citizens. Along the way, he discovers that John Jameson is alive and well, leading a rebellion against the High Evolutionary; that Venom and Carnage came to the planet with the intent of conquering it; and that the planet has some vastly different versions of his old foes.

Ultimately, the show was canceled after the airing of the first few episodes, and its story arc was never resolved.

There was also a short-lived (5 issues, with an "issue .5" prequel) tie-in comic, which, after retelling some of the cartoon's first episodes, expanded Spidey's explorations into the strange new world of Counter-Earth.

Not to be confused with the video-game of the same name.