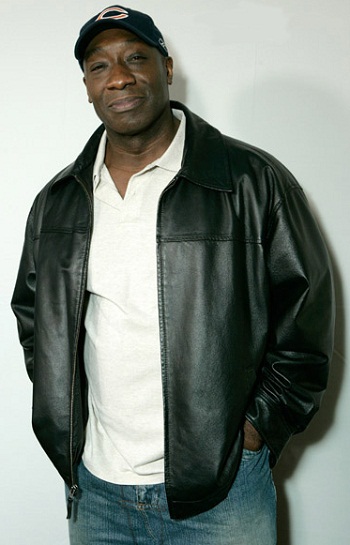 "How can you not like cats?"
— Michael Clarke Duncan
Advertisement:

Michael Clarke Duncan (December 10, 1957 — September 3, 2012) was the quintessential (Large) Scary Black Man, despite the fact that he was actually a nice guy. Had a voice deep enough to rival James Earl Jones in badassery.

While starting out as an actor, he served as a bodyguard for celebrities like Will Smith, Jamie Foxx, LL Cool J and The Notorious B.I.G.. He quit this line of work after B.I.G.'s death, shifting his entire focus to acting.

Probably his most famous role was John Coffey in The Green Mile, but it should be noted that he was the most suitable actor (at the time at least) to play The Kingpin, despite the character being white in the comics. He reprised the role in Spider-Man: The New Animated Series. He was also one of the few actors to play a major character in films based on both DC & Marvel properties, with his role as Kilowog in 2011's Green Lantern film.

In July of 2012, Duncan suffered a heart attack and remained hospitalized for 7 weeks. On September 3rd, he succumbed to and died from the damage caused by said heart attack, which never fully healed. He was 54.

Not to be confused with Mike Duncan.