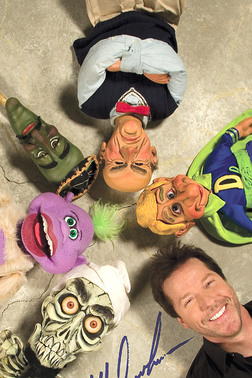 Jeffrey Dunham (born April 18, 1962 in Dallas, Texas) is a popular comedian and ventriloquist. He often proves himself capable with the traditional stand-up schtick, but he knows that people watch him for the puppets.

He's made appearances on numerous TV shows, as well as being featured on Comedy Central Presents.

He's had eight specials on Comedy Central so far:

...and briefly had his own show on the channel, called The Jeff Dunham Show, as well as an animated movie.

He has a cast of puppets, some of which have fleshed out back stories and diverse personalities who provide their own unique interaction with Jeff. Usually, he is the Only Sane Man trying to provide some sense of control as the characters go off on random topics. He has also published a biography, entitled All By My Selves. He is also one of the featured ventriloquists of the documentary I'm No Dummy, along with Jay Johnson (of Soap fame) and Lynn Trefzger.

He has some characters which he uses on tours but haven't been filmed. Dianne from Dinner for Schmucks has since been retired (she never appeared in a TV special, but did appear in the 2010 Identity Crisis tour). He unveiled AJ, or Achmed Junior, in his 2011 special Controlled Chaos, as well as Little Ugly Ass-Jeff (Peanut's ventriloquism puppet)... It Makes Sense in Context (barely).note Little Ugly-Ass Jeff is actually a Call-Back to early in his career (which includes his The Tonight Show appearance) when he did the same bit with a more generic mini-puppet, with "Peanut" manning the puppet both times.

Dunham and his act provide examples of: