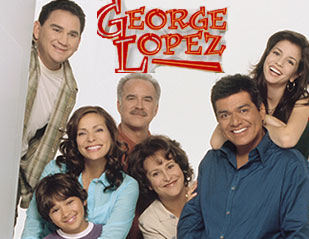 "All my friends know the Low Rider..."

George Lopez, aka The George Lopez Show note Officially, the title is the former, but we call it the latter to avoid confusion with the comedian himself. is a sitcom that aired on ABC from 2002 to 2007 starring stand-up comedian George Lopez, not to be confused with Lopez Tonight.

Noteworthy for being the first American sitcom with a mostly Hispanic cast, and, in the final season, an all-Hispanic cast. Also the second longest running show with said cast.

There were talks to revive the show in 2016, but nothing came of it.

Sabes que? These are the tropes! Wha-cha!: