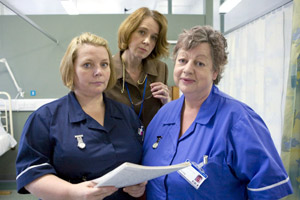 Getting On (2009-2012) is a British sitcom set in a hospital ward a million miles away from Princeton General. Situated at the wrong end of the Sliding Scale of Shiny Versus Gritty, the series is centred on a general ward and the unglamorous lives of its long-suffering staff. The series was written by its three leads: Jo Brand as Nurse Kim Wilde, Joanna Scanlan as Sister Den Flixter, and Vicki Pepperdine as Dr Pippa Moore. The show is intended to be a realistic portrayal of hospital life with naturalistic dialogue and shaky camera movements. Its director Peter Capaldi may have learned a few tricks from his time working with Armando Iannucci on The Thick of It.

Kim has returned to nursing after some time away, and is struggling to cope with the changes the National Health Service has been through in the meantime. New regulations stop her from providing good old-fashioned patient care and constantly throw up problems, not least of which is the over-sensitive Matron Hilary Loftus.

Also spawned a US remake on HBO from the creators of Big Love starring Laurie Metcalf, Alex Borstein and Niecy Nash.