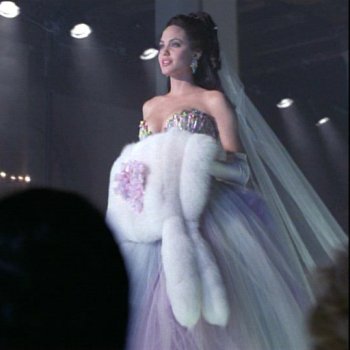 She's dressed as though she's in a fairy tale... when her life was anything but.
Gia is a 1998 television biopic about the life and death of model Gia Marie Carangi. The film stars Angelina Jolie in the title role, alongside Faye Dunaway, Mercedes Ruehl, and Elizabeth Mitchell, and was directed by Michael Cristofer. It was broadcast on HBO. Jolie and Dunaway both won Golden Globe awards for their roles.
Advertisement:

The film follows Gia as she moves to New York City to become a fashion model, immediately catching the attention of powerful agent Wilhelmina Cooper. Gia's attitude and beauty help her rise quickly to the forefront of the modelling industry, but her persistent loneliness drives her to experiment with mood-altering drugs like cocaine. She becomes entangled in a passionate affair with Linda, a make-up artist. However, after a while, Linda begins to worry about Gia's drug use, and their relationship starts to fall apart. Failed attempts at reconciliation with Linda and with her mother drive Gia to begin abusing heroin. Although she is eventually able to break her drug habit after much effort, she has already contracted HIV by a needle containing infected blood and dies from complications from AIDS in 1986 at the age of 26.