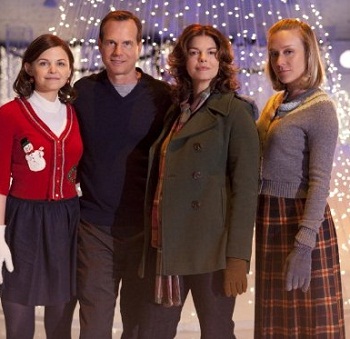 Bill Henrickson (Bill Paxton) is, by all appearances, a traditional family man. He met his wife Barbara (née Dutton) Henrickson (Jeanne Tripplehorn) in college and has had three children by her: Ben (Douglas Smith), Sarah (Amanda Seyfried) and Tancy. Though Barb had a close brush with uterine cancer, the two remain Happily Married. Bill has started his own business, "Home Plus," a small chain of home-improvement stores, and has made enough to buy the two houses on either side of his own, which he now rents out to single mothers as a charity project. Oh, and, yes, he and his wife are members of the Church of Jesus Christ of Latter Day Saints; but in Sandy, Utah, a suburb of Salt Lake City, that's not really a big deal...

...except for how Bill is actually a member of a fundamentalist Mormon splinter group that practices polygamy. The two neighbors, Nicolette Grant (Chloë Sevigny) and Margene Heffman (Ginnifer Goodwin), are also his wives, and their sons and daughters are his. Nicky Grant is the daughter of Roman Grant, who took over the Juniper Creek polygamist compound where Bill grew up, after Bill's grandfather, the former leader, passed away under mysterious circumstances. She joined the family to help look after them all during Barb's illness and convalescence. When she herself began to have children of her own, Margie was brought in as a babysitter. Both women joined the plural marriage of their own free will, though Barb's mother, a traditional Mormon, disowned her for the decision.

The series centers around the lives of these characters, as well as ancillary ones from Juniper Creek; Bill's brother Joey and Joey's wife, Wanda; Bill's mother and father, and his father's other wives. And, of course, there's the typical soap opera drama resulting from a deconstructed Marry Them All, in which a man can cheat on two of his wives by sleeping with the third one when it's not her turn on the schedule. (And yes, that happens. By the first half of the first season.)