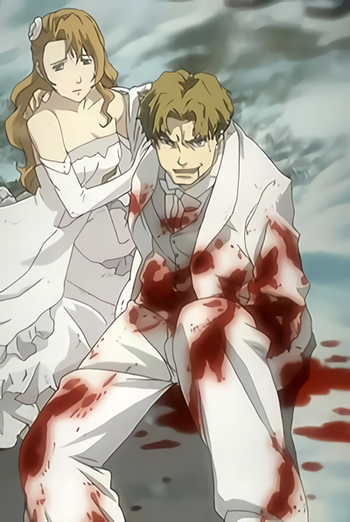 That'll be murder to wash out.
"Even though we are going to shatter thousands of lives, wearing white is gonna make the blood look so pretty."
— Ladd Russo (right), Baccano!
Advertisement:

Ever notice how much more dramatic blood looks on a white background? It follows that wearing a white shirt can be more hazardous than wearing a Red Shirt. The death of a white shirt wearer will be much bloodier than that of your traditional red shirt.

Also, in Korea, China and any Fantasy Counterpart Culture strongly influenced by the same, white is the traditional color for funeral dresses.

A quite literal interpretation of the trope existed in the Bulgarian army around the beginning of the 20th century as some common soldiers would keep a white shirt for last and put it on when defeat seemed imminent, in odd contrast to Bring My Red Jacket.

Compare Snow Means Death, which uses the color white to similar effect. See also Ethereal White Dress, for when the violent event is only implied or is part of a backstory, Villain in a White Suit, Blood-Splattered Wedding Dress, and Bedsheet Ghost. Contrast Bring My Red Jacket.

Since this is a Death Trope, expect unmarked spoilers in the examples below!