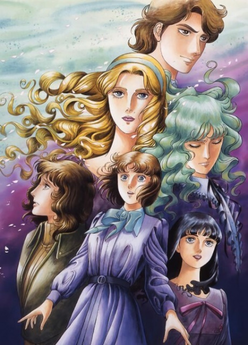 Dear Brother (Oniisama e...) is a Girls' Love manga series by Riyoko Ikeda, also the author of The Rose of Versailles. Serialized in Shueisha's Margaret from March to September 1975, it is one of the earliest examples of the genre, and has had a considerable influence on many yuri and shoujo series that came after it. It was adapted into an anime series by influential director Osamu Dezaki, which first aired on NHK from 1991 to 1992 for 39 episodes.

Told through a series of letters written by the protagonist to her Cram School teacher and older brother figure, Henmi Takehiko, it is the story of Misonoo Nanako, an average girl who manages to be accepted to Seiran Academy, a prestigious girls' school for the wealthy and talented. Despite lacking the background and qualifications of her fellow students, she is soon invited to be a member of the Sorority, an elite group of talented and popular girls. This makes her an easy target for the machinations of her ambitious peers — especially one Misaki Aya, who will do anything it takes to discredit her so she loses her place in the Sorority.

As time passes and Nanako meets more people, she becomes embroiled in the drama and complex, often angsty relationships between them... And that's only the tip of the drama iceberg.

It's available on Hulu, Viki, and RetroCrush under the title "Dear Brother." Discotek Media announced that they licensed it for a Blu-Ray release in 2021, though due to licensing restrictions, the series will only be available for a year.