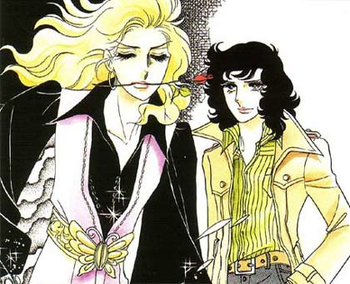 Hana no St. Justenote "St. Juste of the Flowers" and Kaoru no Kiminote "Prince Kaoru"—even their nicknames say it!
Advertisement:

This is mainly a Japanese Media Trope but does occur occasionally in other media. Two girls have largely different personalities that both lie on the traditional masculine spectrum.

This has a tendency to happen in an Improbably Female Cast where varying male personalities are limited and in Yuri to give the lesbians and the audience one more androgynous girl to drool over. This usually takes the form of one girl being a lad-ette personality-wise and the other girl will be a more refined Prince Charming complete with a Bishie Sparkle. Other variations exist as well, such as the likelihood that one may be more athletic while the other one is a Badass Bookworm.

As with any two-character trope, the two characters have to have some sort of relationship with each other, be it friends, family, love interests, or rivals for a love interest, so the two characters can be playing the traits directly off each other. Expect a Pseudo-Romantic Friendship if it's a Yuri. Expect an Odd Friendship regardless. Sometimes the girls will not get along and there will be moments of rivalry or even Belligerent Sexual Tension between the two.

Compare the Bifauxnen to the admirable one and the Lad-ette to the mannish one in Four-Girl Ensemble and compare both to the tomboy in Tomboy and Girly Girl.