Blind and the Beast 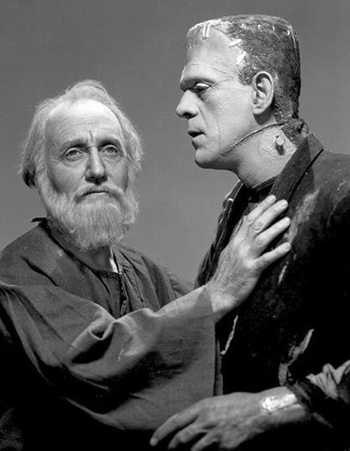 "With the way she sees and the way he looks, it's a perfect match!"
— Yente the Matchmaker, Fiddler on the Roof.
Advertisement:

A character with a freakish appearance, experiencing loneliness, happens to stumble into a blind person who doesn't realize that the freak is not quite human. They strike up a friendship or even romance, and the audience learns An Aesop that blind people might be better than we are because they are quicker to recognize inner beauty.

Usually the deception doesn't last forever, but by the time the blind person finds out what the other "looks" like, they've already come to appreciate the person inside.

Melvin - better known as The Toxic Avenger - and Sarah, his blind girlfriend.

Melvin - better known as The Toxic Avenger - and Sarah, his blind girlfriend.