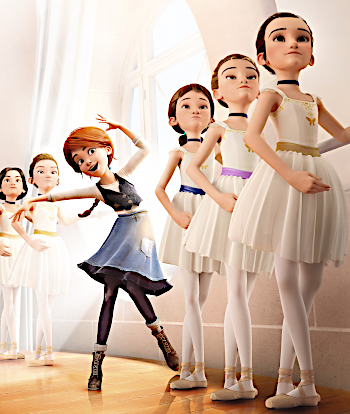 "Mademoiselle, the river-dancing try outs are in the other studio."
"I don't play accurately — anyone can play accurately — but I play with wonderful expression. As far as the piano is concerned, sentiment is my forte. I keep science for life."
— Algernon Moncrieff, The Importance of Being Earnest
Advertisement:

A contrast between a highly-skilled, perfectionist virtuoso and a less-skilled, but more inventive and original, artist. This is a plot common to stories that focus on the arts (usually music or theater), or sports that require mixing physical ability with creativity (such as dancing or skating).

Say our protagonist Alice is in a ballet class with another girl named Betty. Betty is a dancer's dancer: she's highly respected, the top student of every teacher, and the preferred partner of every boy in the group. She practices every day, pushing herself, scrutinizing every tiny flaw. The other students have places to go and things to do after class, but Betty is always at the studio. Ballet is her life. But sometimes Alice notices what looks like closely-guarded resentment — in Betty's frown, in her post-show remarks to her dancing partner, or in her sigh whenever she sees her domineering Stage Mom.

Alice isn't like Betty. She would never get up early for a pre-dawn warmup. She daydreams her way through class. She has never mastered that one move, no matter how she tries. But she loves to dance, and it shows in every performance. Even when she lands flat on her tail, she leaves smiling. She has friends outside the studio, a solid family who cheers no matter what, and an optimistic outlook on life. And if dancing ever stops being fun, she'll just stop doing it, though you can't imagine she would ever want to quit.

The dance judges put Betty's number on top every time. Put the pair in front of an audience, however, and it's a different story.

The audience doesn't see Betty's perfect form. They see that she dances with a face like a wet weekend. Alice is much more interesting. She turns a pratfall into a quirky dance move, makes faces at the kid in the front row and laughs her way through the final act. Betty may be rolling her eyes from backstage, but she will likely go home wondering why Alice got a standing ovation for that nonsense when all she got was polite applause.

Betty fails to realize that the audience can see the difference between good technique and good performance. She dances to the 'correct' standards — whether the ballet form itself or her own expectations — while Alice dances for the sheer joy of the art. The audience may not realize what "perfect" ballet is, but they know when the dancers are enjoying themselves... and even those who do know what good form is would rather see originality, artistic interpretation, and simple fun — which Betty often can't do, because improvisation risks the loss of 'perfection'.

Red Oni, Blue Oni rivalries where the two are rivals in the same field often feature this with the blue oni as the Technician and the red as the Performer. Since blue types are often loners or social misfits who put a lot of importance on their one extraordinary ability, having their red counterpart outperform them (even if only in the mind of the audience) can lead to some nasty results or a breakdown.

If they can reconcile, Defeat Means Friendship will take hold, and the girls will each learn from each other: Betty will learn to loosen up and rediscover the joy of her art, and Alice will try and emulate Betty's dedication and practice.

Obviously, the form that Alice's "originality" manifests itself in will depend on the art/sport she's involved in. She might be an imaginative writer who can't spell, or a painter of simplistic, cheerful paintings in an art school full of students obsessed with complexity. She may be the ice skater who zooms around the ice happily, but can't quite pull off that tricky spin, or a musician that finds sheet music boring and likes to jazz it up with their own variations (with varying degrees of success). Whatever the scenario, the individuality that makes her "imperfect" is the same individuality that endears her to anyone watching.

Generally, the narrative will be in favor of the enthusiastic performer (who sometimes has The Gift, but not always) rather than the diligent technician, but that's not to say that the performer is always in the right. For some, honing their skills to be as best they can be is rewarding enough, or makes the effort put into doing so all the more satisfying.

At its best, this trope sings the praises of enjoying your talent and being yourself; at its worst, it implies that sticking to proper technique and a drive to improve leads to Creative Sterility or inability to enjoy the practice. Differs slightly from (but is related to) Hard Work Hardly Works, where the technician is undeniably better at what they do, but they are contrasted with a Brilliant, but Lazy performer who is ultimately more fun to watch, or gets acceptable results with a fraction of the effort. In this case, Hard Work Hardly Works adds insult to injury by giving the cheerful slacker superior skill than those around them who actually practice. Also similar to Weak, but Skilled; similar in that there is a better trained performer against a stronger or more talented rival, but different in that the one with the best training wins, usually through cleverness and skill.

At times, Alice and Betty may cross paths with Cassie: a character who is both technician and performer. In this case, Cassie's background may overlap with Talented, but Trained (innate talent + hard work).

Contrast the Villainy-Free Villain and Opposing Sports Team. Could also be seen as a form of Snobs Vs Slobs, with fastidious technicians who pay attention to detail as the foil for performers who believe in doing what comes naturally. In a military or combative setting, this dichotomy may form the basis for Opposing Combat Philosophies, along with Soldier vs. Warrior.