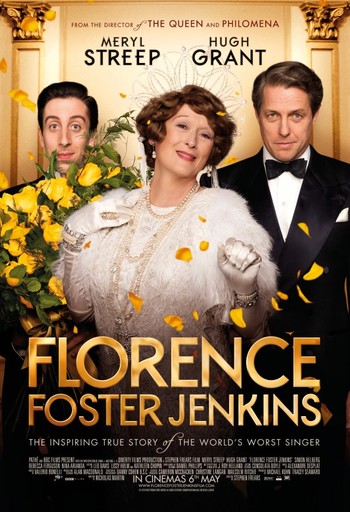 Florence Foster Jenkins is a 2016 biopic/dramedy film directed by Stephen Frears. Meryl Streep stars in the title role, alongside Hugh Grant (who came out of retirement just to work with Streep).

Based on a true story that's stranger than fiction, it tells the story of Madam Florence - an American socialite who had a great love of music. She was a gifted pianist in her youth, but a nasty bout of syphilis (and/or the only treatment options at the timenote neurotoxic heavy metals, namely mercury and arsenic) permanently damaged her hands. So she turned to singing instead.

The problem? Florence was bad. Not merely passable or mediocre. She was ferociously terrible. She had no sense of rhythm, pitch or tone and her attempts at singing arias resulted in high-pitched shrieking. She was so legendarily bad that she ended up with a Misaimed Fandom - who came to see her perform because of the unintentional comedy. Believing they loved her singing, and believing she was actually talented - partly because of the Blatant Lies of her husband St Clair Bayfield (Grant) - Madam Florence bought out a thousand seats at Carnegie Hall to give a performance dedicated to the soldiers of World War II.

The film covers Florence's desires to make a comeback, and her famous performance at Carnegie Hall. Simon Helberg also stars as her pianist Cosme McMoon and Rebecca Ferguson as St Clair's girl on the side Kathleen.