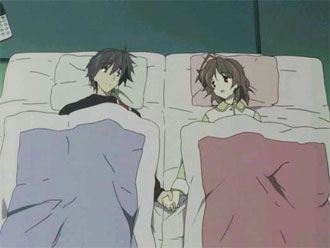 Aww, they're waiting till marriage.note Wait a minute! They are married? And that means they can finally… hold hands?
"It's easy to sustain a relationship when sex plays no part, and impossible, I have observed, when it does."
— Gore Vidal on the secret to his decades-long relationship with Howard Austen
Advertisement:

No Hugging, No Kissing is a trope where there is no true romance in the series except in the shipper's mind. Its distant cousin is the Chastity Couple, sharing the lack of physical affection of the former trope. But the partners in question are in a romantic relationship — they simply are not doing what many audiences may expect.

The Chastity Couple is a pairing where it is clear the characters are romantically involved but, for any number of reasons, they are never portrayed as sexually intimate. The interaction between the duo can at times be mistaken for an affectionate platonic relationship instead of a romantic one. However, their love for each other is confirmed by either Word of God, their own confession, or other helpful cues, no need to get all perverted about it. Nevertheless, many fans will resort to Rule 34 to make up for the lack of sex in canon.

May accidentally be confused for But Not Too Gay, where the motivations for not showing intimacy are tied to issues of representing minority sexualities. Compare The Not-Love Interest, Heterosexual Life-Partners, and Platonic Life-Partners, which are all examples of close couples who are not romantically involved.

Not to be confused with Sexless Marriage. In a sexless marriage, we're meant to understand that one or both partners do want sex, and the fact that they don't is connected with relationship problems and results in dissatisfaction. In contrast, a Chastity Couple is content to have a relationship that doesn't involve sex. Also not to be confused with Sleeping Single. In television from the 1930s to the 50s it was common to depict a husband and wife sleeping in their own single beds separated by a nightstand, but most of the time this was understood to be merely a convention of censorship. Its purpose was simply to avoid showing the couple in a suggestive situation, and other evidence such as pregnancy and kids could still indicate that their marriage wasn't actually chaste.

Please avoid family shows in examples where possible as they are likely to tone down romance in general because of the intended audience.

Contrast this trope with its inversion Friends with Benefits, in which two people have sex but not romance, while a chastity couple has romance without sex. Both are subtropes of Romance and Sexuality Separation. See also Innocent Cohabitation, where they just live together and aren't in a relationship, and Lets Wait Awhile, where they're simply putting off the next step. Compare to Can't Have Sex, Ever, where a couple might if they could but they can't so they don't.