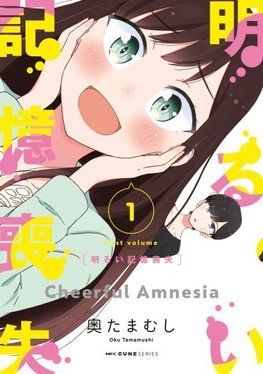 When Arisa wakes up in the hospital, with no memory of the last two years. When Mari, a woman who's just Arisa's type, arrives at the hospital and tells her that not only are they living together, but they're actually girlfriends, Arisa is over the moon!
Advertisement:

Cheerful Amnesia (Akarui Kioku Soushitsu) is a Romantic Comedy Girls' Love manga by Tamamushi Oku, which ran in Comic Cune from 2016 to 2020. It takes the Amnesiac Lover trope and plays it for comedy instead of for drama. Arisa is quickly falling back in love with Mari, but there are a few bumps in the road. Mari was the more submissive one (bottom) in their relationship, relying on Arisa to take the initiative in several areas of their relationship. Now that Arisa has lost the memories of the experiences that placed her as the top, both of them have a lot of learning and growing to do to to navigate through and understand this new version of their love!