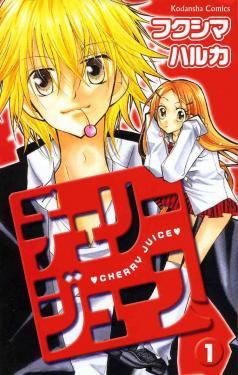 "An Aries, born on April 18th, blood type A. Popular with girls and a member of the cooking club. I wonder if he has a crush on anyone? This is Minami Hasaki. He's 15 years old... and my younger brother."
— Otome Hisaki
Advertisement:

Cherry Juice is a Shōjo manga written and illustrated by Haruka Fukushima (Instant Teen: Just Add Nuts). Originally published in Japan by Kodansha, the series ran from 2004 to 2006 in the manga magazine Nakayoshi. It has been licensed for release in English and German by Tokyopop.

Teenaged siblings by marriage Minami and Otome Hasaki spend a lot of time together: they attend the same junior high, are nearly the same age, and even recently have been forced to share a bedroom. Though the pair didn't get along very well when their parents first married five years ago, their relationship has since developed into a strong bond, despite their moments of friendly antagonism. In fact, one could say that they are as close as any brother and sister could hope to be.

However, when Otome begins to date her long-time crush Amane, Minami is forced to realize something that was already quite obvious to some of their friends: that his feelings for his sister run far stronger than familial affection. And as Minami's rivalry with Amane heats up, Otome is soon forced to question whether or not she feels the same. Together, the step-siblings must figure out the true nature of their relationship, all the while dealing with the pressures of a jealous boyfriend, meddling relatives and classmates, and societal taboos.

Tropes in Cherry Juice include: