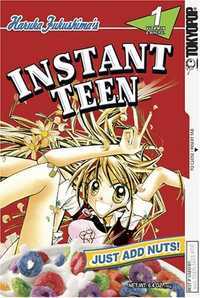 Instant Teen: Just Add Nuts (original Japanese title: Otona ni Nattsu, literally Nuts To Make You An Adult) is a Japanese shōjo manga by Haruka Fukushima, published by Kodansha in Nakayoshi from 2001 to 2002. The manga was published in English by Tokyopop; the Tokyopop edition of the manga is out of print as of August 31, 2009.

The story follows the misadventures of one Natsumi Kawashima, a fifth-grader who desires to be an adult. She eventually obtains magical nuts that allow her to transform into an attractive grown woman some time after consumption. Using this magical reagent, she manages to live out her fantasies as an adult.

The series spanned four volumes, with a serialized sequel in Nakayoshi magazine, おとなにナッツ (Nuts to Make You an Adult Two) in a single volume.