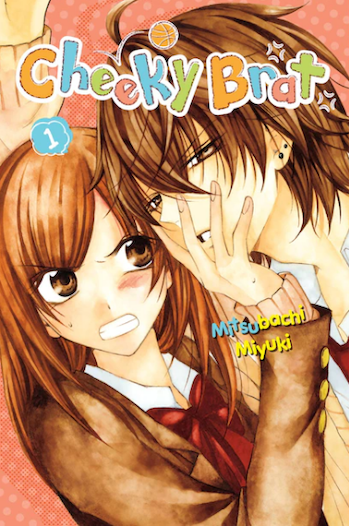 Cheeky Brat (Namaikizakari, literally "Full Bloom Cheekiness") is a manga series written and illustrated by Mitsubachi Miyuki. It was serialized in the magazine Hana to Yume from 2013 to 2022, and was licensed in English in 2021 by Yen Press.

As the oldest of six siblings, Yuki Machida has learned to be diligent and responsible at a young age, so much that she puts forth all of her energy in managing Ryuhoku High School's basketball team. Upon staffing as the welcoming committee for incoming first year students, she meets the arrogant Handsome Lech Sho Naruse, who also becomes a member of the basketball team. Day after day, Sho tests Yuki's patience with his selfish whims and lecherous comments.

When Sho discovers Yuki has a crush on the basketball team's captain, Kido (who has just gotten a girlfriend, no less), she thinks it's the beginning of the end, until he manages to worm his way into her feelings and support her during times of distress. After the final match of the year, he suddenly admits to Yuki that he likes her (not that it changes whether or not he wants to touch her boobs). Yuki is initially horrified, but Sho becomes relentless in making her fall in love with him. With his persistent pursuit, it's only a matter of time before Yuki's resistance wears down.