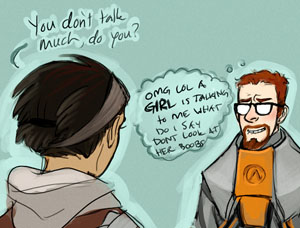 So this is the possible reason for his lack of dialogue...note why gordon doesn't talk by makani

"There are so many girls in there, and I can't...I can't talk to them. So...I sit out here...and I wait until they leave."
— Duder, Little White Lie
Advertisement:

A type of Cannot Spit It Out, this is a condition befalling certain male characters (usually), especially those on the younger side, or who otherwise are lacking in social graces. When he encounters a female, especially one he's attracted to, he loses all capacity to speak, or at least make meaningful sentences. He may stammer, blurt out embarrassing nonsequiturs, or become entirely mute. The trigger may be restricted to attractive females, or just the one, in which case it's likely to be Gibberish of Love.

The female, for her part, may become irritated and impatient with this behaviour, may be understanding and accommodating (or even condescending), or if she has the same problem concerning men, may even respond in kind, in which case getting any kind of conversation going will take something akin to a miracle.

Despite the title, female characters who cannot talk to men are not uncommon, nor are same-sex cases (either romantic or not). In this case, it's usually triggered only by male characters they find attractive or have a crush on; if a female character literally has difficulty talking to any male at all, it's usually a sign that she had an abusive or domineering father, grew up in a misogynistic culture, or had some other bad experience that explains the issue. When a male character cannot talk to women, in contrast, it's almost always an issue of a general lack of confidence and/or experience and is rarely portrayed as a result of trauma.

Related to, and not to be confused with, Love Makes You Dumb and Paralyzing Fear of Sexuality. Also related to Socially Awkward Hero and the Chaste Hero, who can talk to them, but just doesn't understand affection. In extreme cases may become Allergic to Love. A subtrope of Situational Sociability, as someone who Cannot Talk To Women is perfectly capable of normal conversation except when faced with the opposite sex.

Trying to talk to Gabriella

Cricket is in such mad love with Gabriella that he can barely even get a sentence out even when he's that close to her.

Trying to talk to Gabriella

Cricket is in such mad love with Gabriella that he can barely even get a sentence out even when he's that close to her.