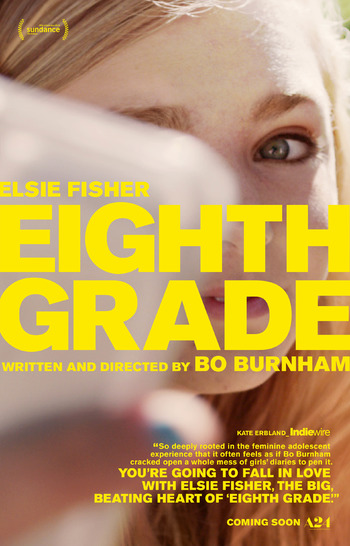 Based on the most awkward year of your life.
"Growing up can be a little bit scary and weird."
— Kayla Day
Advertisement:

Eighth Grade is a 2018 American coming-of-age comedy-drama film notable for being the feature-length debut of musical comedian Bo Burnham as a director and writer. The film premiered on January 19, 2018 as part of that year's Sundance Film Festival before receiving an official theatrical release on July 13 of that year.

It focuses on the life of eighth-grader Kayla Day (Elsie Fisher) as she navigates her last week of middle school and struggles to prepare herself for high school. She spends her days surfing the internet on her phone and trying to make friends while posting barely-seen motivational videos to her YouTube channel. As she attempts to branch out and connect with kids her age, her single father attempts to connect with her.

Burnham based the initial idea of the film off of his own struggles with anxiety, and didn't find sufficient funding for two years. He strove to make its depiction of Generation Z as authentic and realistic as possible, and as a result the MPAA gave the film an R rating upon release that elicited controversy as it would prevent actual eighth graders from seeing it. In response, A24 organized completely free unrated screenings across the US.