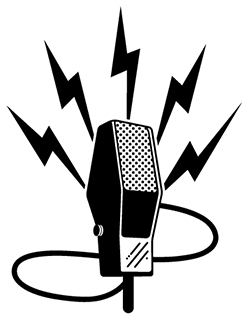 Microphones have been around since the 1870s, so they have become a familiar piece of technology. Yet, despite many technological developments since then, one problem plagues microphone users in Fictionland: feedback. This loud squeal or throbbing sound is so ubiquitous that Ebert's Glossary of Movie Terms has a "Feedback Rule". It seems inevitable that someone using a microphone will be interrupted by this sound, particularly when first speaking into it.

The sound can be used in different ways. Sometimes a savvy character will do something on purpose to create this sound in order to get attention, such as whistling into the mic, moving it near a speaker, or performing a Mic Drop. On a live recording of musicians or other performers, its presence lends credence to the notion that the performance is somehow raw or uncut and thus more realistic or natural. In radio plays and some early animation, the feedback is an audible cue that a microphone is in use, a kind of demonstrative sound effect that is helpful to the audience. Feedback can also serve to point up a speaker's inexperience with sound equipment (moving the mic too much and/or pointing it towards a nearby speaker being likely to result in this sound), and the audible faux pas is useful for indicating anxiety and prompting laughter. By extention, it may serve as an audible indicator of general inexperience with public speaking or performance.

This Stock Sound Effect may have some overlap with The Coconut Effect when the creators are trying to highlight microphone use and think this is what audiences expect a mic to sound like. It may also result from an instance of Is This Thing On?, when an inexperienced user thinks they have to test the mic before saying their piece.

As the Franklin D. Znorgzevelt Middle School science fair starts, Mr. Desk tries talking to the mic but the feedback was too loud for the whole auditorium.

As the Franklin D. Znorgzevelt Middle School science fair starts, Mr. Desk tries talking to the mic but the feedback was too loud for the whole auditorium.