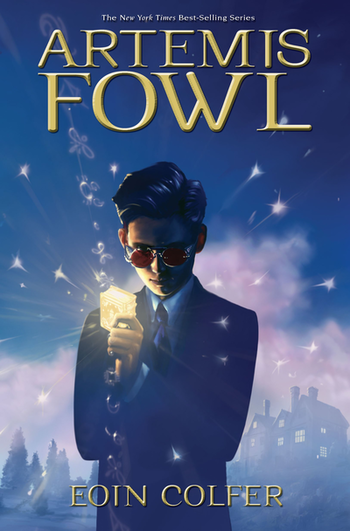 I believe it's time to let our diminutive friends know exactly who they're dealing with.
"I am not concerned with us all, just myself. And believe me, I shall be perfectly fine. Now, sit, please."
— Artemis Fowl II
Advertisement:

A series of middle grade novels written by Eoin Colfer.

Originally, the tale of an Irish pubescent evil genius and his efforts to acquire money and power by exploiting the secret underground world of fairies using both magic and advanced super-technology. In later books in the series, he becomes a more benevolent fellow, working cooperatively with the fairies to curtail human and fairy mischief. The series takes cues from suspense, action, "heist" crime films, and James Bond-Esque spy movies and transplants them into a modern fantasy setting.

The series contains eight novels, the final one having been released on July 10th, 2012.

Two short stories are available in the companion book The Artemis Fowl Files (2004):

Four graphic novels appear to form an alternate canon to the prose (there were other less obvious changes, but one is listed under Race Lift). A different graphic novel adaptation of the first book released in 2019 with an adaptation of The Arctic Incident two years later.

A film adaptation was announced in 2013 after being stuck in Development Hell. It was produced by Walt Disney Pictures and The Weinstein Company. Kenneth Branagh directed the film to be penned by Conor McPherson. In 2017, it was reported

The titles were reissued in paperback in 2018 with new cover artwork as tie-ins for the upcoming film. All of these releases include a sneak preview of The Fowl Twins, a spinoff series about Artemis Fowl's younger brothers that released in November 2019. A second Fowl Twins title, Deny All Charges, was released in October 2020, folllowed by The Fowl Twins Get What They Deserve in October 2021.