Never Going Back to Prison 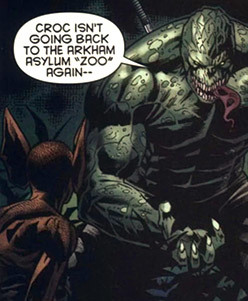 "You dogs'll never take me alive! I ain't goin' back to prison, so just get on out of here before I do something dramatic!"
— Crazy Hermit, The Zombie Knight
Advertisement:

Prison is not a nice place. There are lots of reasons for this: the loss of freedom, possibly being treated like you're not even human, wondering which fellow prisoner might decide that some petty grudge needs to be paid back by killing you, the toll that things like Solitary Confinement or Prison Rape can take on your mind, and it can always get worse.

So, it's not surprising that a character who has finished serving their prison time or has managed to escape makes "never again" their motto. They frequently show an intense fear or hatred of going back, and this can make them all the more determined to be and stay a Reformed Criminal... or it may lead to deciding that Suicide by Cop or killing themselves is better than being confined again. The latter sort may be considered akin to a Dangerous Deserter, as they may do anything during the course of a crime to avoid capture.

Contrast Self-Restraint, Prefer Jail to the Protagonist, and "Get out of Jail Free" Card.