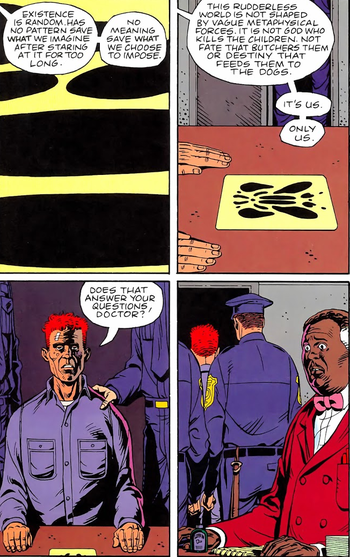 The job of a psychiatrist seems safe enough so long as the violent patients are restrained, but this is often not the case in Fiction Land. There are people out there who are dangerous to your mental health and no matter how much you want to help them, it is you that ends up needing the shrink. At its least damaging, you just need a few hours of therapy. At its worst, you end up as incurably insane as they are.

May explain why most don't bother.

An occupation-specific Sub-Trope of Infectious Insanity. Also often a sub-trope of Hannibal Lecture, but not always, as sometimes the character has no intention to do it. May also relate to The Cobbler's Children Have No Shoes, if the therapist or their family are themselves suffering untreated mental illness.

An argument could be made that this trope deserves its own Sub-Trope for therapists (particularly female ones) that fall in love with their patients and pursue romantic relationships with them. Professional codes of conduct, such as the NASW Code Of Ethics, generally frown on this sort of thing.

While not entirely the case, this can occasionally be considered Truth in Television, seeing as some therapists do end up depressed or taking medication due to the relationship with their patients. To prevent this, it is generally recommended for even graduate students in the field to begin seeing therapists of their own.

Not to be confused with Therapy Backfire or Critical Research Failure in the field of psychology.