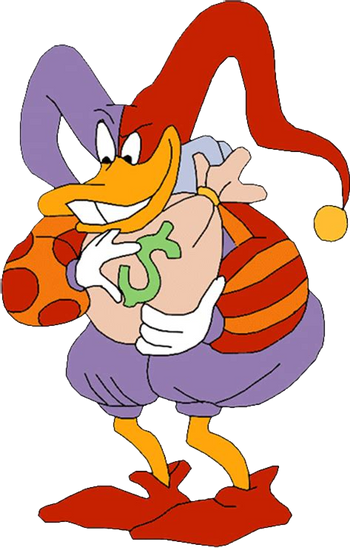 A step down from the Monster Clown, a Villainous Harlequin is a villain that taps into the same clownish vein, but is usually Played for Laughs and rarely attempts to be outright scary.
Advertisement:

If the Villainous Harlequin is female, she'll often be the Perky Female Minion of the Quirky Miniboss Squad, rarely going any higher on the Sorting Algorithm of Evil. Compared to the Monster Clown — who is genuinely threatening — she is usually closer to an Ineffectual Sympathetic Villain. She has shades of The Trickster in her impulsive and anarchic ways, but lacks the intelligence necessary for this trait to provide any real danger.

Regardless of gender, Villainous Harlequins may fancy themselves Smug Snakes, but their childish demeanor and outlandish appearance (which may range from traditional jester costumes to impossibly cool outfits or incredibly impractical poofy dresses) ruins any chance of anyone taking them seriously. Expect temper tantrums when their plans inevitably fail, and for them to either be Chew Toys of The Dragon or a member of the Goldfish Poop Gang. Such characters are even more likely to be a Psychopathic Manchild than the Monster Clown but also much more likely to have the childish mentality that goes with it as a weakness that can be used against them by their enemies.

But be careful: if the Villainous Harlequin gets promoted to The Dragon or Big Bad levels, you're going to have a serious case of Who's Laughing Now? on your hands.

The Villainous Harlequin is the product of the popular view of the Court Jester, which is that of an idiotic buffoon. (This is despite the fact that the jester was one of the most insightful members of a king's court, due to his position outside the usual social ranks.) Interestingly, in some Renaissance art Death itself is often portrayed dressed in motley, or "pied" clothing, which is often conflated with the true Harlequin outfit. The more danger a Villainous Harlequin poses to the protagonists, the closer he or she gets to Monster Clown.

Reala is a First Level Nightmaren and an agent of Wizeman the Wicked.

Reala is a First Level Nightmaren and an agent of Wizeman the Wicked.