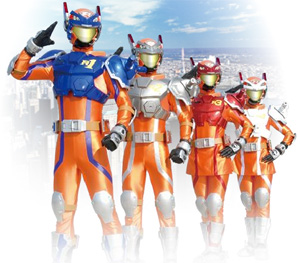 A toku that serves as the Spiritual Successor to Madan Senki Ryukendo, taking the Rescue genre and seeing just how outlandishly awesome it can make it. The plot centres on the titular Rescue Force, a team of rescue workers equipped with high-tech equipment designed to stop extreme natural disasters. It carries a Rescue Police vibe in that their equipment is designed primarily for rescue efforts, not to fight evil. Despite this, the show slowly crept towards evil-fighting with antagonists Neo Terror artificially creating extreme disasters and sending Mooks to interfere with the rescue efforts.

With the same writing staff, stunt crew and suit aesthetic, any fan of Ryukendo will probably like Rescue Force. And with the name of a toy company in the title of the show, there should be no doubt that it's Merchandise-Driven all the way.

The show got a sequel with a new branch of Rescue Force in the form of Tomica Hero Rescue Fire.

If you liked this show, try out Machine Robo Rescue, which also takes the Rescue Genre to new heights, except with sentient giant robots working with kids. Or PAW Patrol, the Rescue Genre with Precious Puppies and Transforming Mecha.