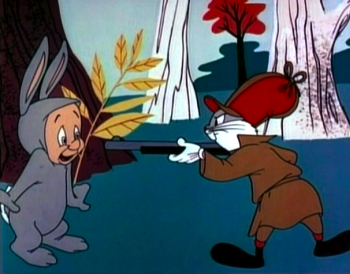 The Hunter Becomes the Hunted.
"You really are a confounded fool. Aren't you? I'd heard everywhere that the Prince was an imbecile whereas his servant Blackadder was respected about town. Now that I discover the truth I am inclined to beat you to death."
— The Duke of Wellington, Blackadder The Third
Advertisement:

Two characters swap roles in life, usually gaining greater understanding of each other's challenges. In '50s and '60s sitcoms, this often took the form of Dad staying home to watch Junior while Mom was away for the day. Later kids tend to swap roles with parents. Another common formulation, usually played for comedy over the aesop, is masters and servants swapping roles for some deceptive reason.

Often begins with a fight, where the two characters are convinced they can do the other character's job better, and/or the other character has a much easier life. Usually ends up with a Be Careful What You Wish For aesop, with both characters realizing that they prefer their own roles. Regardless, this may dovetail into Nothing Is the Same Anymore.

Compare with Hourglass Plot, Decoy Leader, and Emergency Impersonation. More fantastical works may feature an Overnight Age-Up paired with a Fountain of Youth for characters whose different roles stem in large part from their age gap. If the characters don't just swap roles but literally swap bodies then it's a "Freaky Friday" Flip, which often invokes this trope. Prince and Pauper explores a change in class/economic roles.

Compare/contrast Role Swap AU, where the characters switch roles in an Alternate Universe, and this reversal is treated as the norm of that particular universe. If character's roles are exchanged for prolonged periods, then it's a Role Swap Plot.

Stan and Roger decide to swap places after being annoyed by each other.

Stan and Roger decide to swap places after being annoyed by each other.