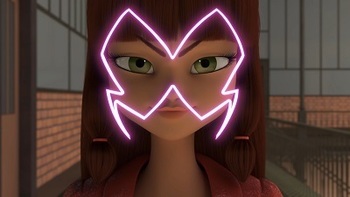 Lila returns to school, still lying to everyone so that people will like her. This gets Marinette angry and Hawk Moth sends an akuma to school. However, Marinette resists the feelings just in time and Lila takes the akuma for herself. Bargaining with Hawk Moth, she willingly becomes Chameleon, turning into people through a kiss and putting them to sleep at the same time.