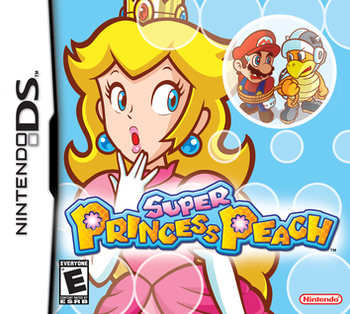 Super Princess Peach is a 2005 Nintendo DS Platform Game Spin-Off from the popular Super Mario Bros. franchise, developed with help from TOSE. Though Peach has had playable appearances dating back to Super Mario Bros. 2, this is the first game where she takes up the starring role.

In a reversal of the typical Mario formula, Bowser has kidnapped Mario and Luigi and hauled them off to Vibe Island, and is wreaking havoc on the inhabitants' emotions with a wand called the Vibe Scepter. Determined to rescue them, Peach sets off on a journey with the help of a magical talking parasol named Perry. Due to the influence of the Vibe Scepter, Peach also gains powers based on emotions (joy, anger, sadness, and calm) that will help her solve some of the puzzles.

Example of:
Level in the Clouds