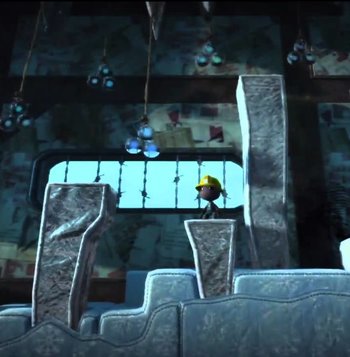 Keep an eye on the ceiling.
Advertisement:

In platform video games, completely inanimate objects in the ceiling seem to know when a player is approaching and fall down accordingly. And only the player because the scenery just doesn't care about the enemies somehow.

The most common offenders are:

Notice: In Real Life, falling icicles kill dozens of people each year, although it's the mass of the upper part of the icicle, not the pointy end that's lethal.

Subtrope of Malevolent Architecture and part of Everything Is Trying to Kill You. Note that this trope doesn't include non-inanimate enemies (like Thwomp in Super Mario Bros. series) with that kind of behavior, nor does it include Death Traps which look like they're deliberately made to do their thing.

See also Collapsing Ceiling Boss, where a boss attacks by causing things to drop from the ceiling. For Stalagmite Spite - things that come from below instead of falling - see Spikes of Doom.