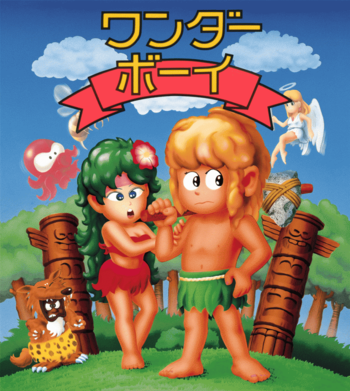 Boy and Tina in the forest with an Angel and many mooks.
See the artwork of Wonder Boy Returns 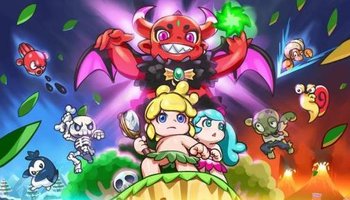 Now being surrounded by a red devil and various mooks.
Advertisement:

Wonder Boy is a side-scrolling platform game by Sega and Escape (now known as Westone Bit Entertainment) originally released for the arcades on April 21, 1986. The player controls Boy (aka Wonder Boy), a young boy in a tropical setting who sets out to rescue his girlfriend Tina from an Evil Witch Doctor known as Kingnote sometimes known as Tom-Tom, Tanya, and King Drancon, respectively; see Dub Name Change below. Along the way he picks numerous power-ups such as skateboards and throwing axes while trying to maintain his vitality by eating as much food as possible.

Wonder Boy was ported to various Sega platforms such as the SG-1000, Sega Master System and the Game Gear, as well as a few 8-bit home computers (namely the Commodore 64, Amstrad CPC and ZX Spectrum). The game also received a licensed re-release for the Nintendo Entertainment System by Hudson Soft titled Adventure Island, splitting the franchise into two directions. While the Adventure Island sequels remained true to the style of the original game for the most part, the Wonder Boy sequels would take on a fantasy-themed action RPG approach.

Surprisingly, long after the announcement of Monster Boy and the Cursed Kingdom and the Wonder Boy: The Dragon's Trap remake, Korean company CFK released a follow-up called Wonder Boy Returns via Steam on October 12, 2016. It uses the same arcade gameplay as the original, but redesigned levels and bosses, with the main antagonist being a red devil. On November 22, 2016, the Ver 1.0 update was released to address issues players had with the initial release, and included two additional playable characters: Classic Boy and (New) Tina. Unfortunately, Wonder Boy Returns had been delisted on May 23, 2019, with an actual remake using the same assets, Wonder Boy Returns Remix, replacing it on that same date.