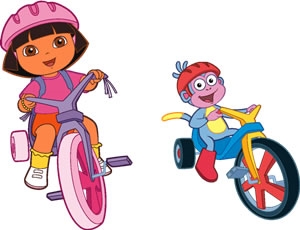 Kiddies (and monkeys), you can never be too safe, even on your tricycles!
In many shows, mostly those made for kids, any scene showing the characters biking, "scootering", skating, or doing anything similar, one thing that won't be left at home is a bicycle helmet. The only time a character will go sans helmet is in a Very Special Episode about wearing your bicycle helmet, and/or show where the characters Can't Get Away with Nuthin', where said character will either A. Get caught by the parents, or B. get into an accident that results in an injury that could have been prevented if they had worn said helmet.
Advertisement:

Knee and elbow pads can also appear in this trope, although not as frequently. When the character is traveling by car instead of by bicycle, prominent display of a properly-buckled seat belt (or neglecting to buckle up in a Very Special Episode situation) serves the same function. Although this trope is most common in children's works, it can still be found in ones aimed at adults, especially if motorcycles are involved, as there is a large subset of motorcycle enthusiasts who believe that helmets detract from their image.

This trope can also contribute to a good amount of Fridge Logic in situations in which time is a priority, or during quick transitions of little time, yet the characters find time to strap on safety gear.

While there is nothing wrong with wearing a helmet (and many Real Life cyclists, including essentially all pros, would never dream of going biking without their helmet), generally in Real Life, many people bike around without helmets, and don't usually find themselves getting in accidents caused by the wrath of helmet gods for not wearing any gear. Ditto for skating and other activities. Helmet laws do exist

however, not necessarily for bikes, but much more often for motorcycles. (And even if a hero doesn't need a helmet to survive, he likely wouldn't want to get a ticket for not wearing one.)

However, the Moral Guardians don't want kids to think, "My favorite TV character doesn't wear a helmet, so why should I?" Thus, no head goes without a helmet to set a good example.

It should also be noted, at least according to this site,

that nobody really wore helmets as much as they do now until The '90s. Ironically, accidents went up, because people believed if you wore a helmet, you were guaranteed safe from any accident. Face it, while a helmet does have some protective value, it's not going to make you invincible.

Contrary to what one might think, this is not the inverse of Helmets Are Hardly Heroic, about the tendency of heroes in the fantasy and sci-fi genres not to wear helmets in battle. It is the inverse of Safety Gear Is Cowardly, when helmets are not to be found at all. See also the Safe Driving Aesop.