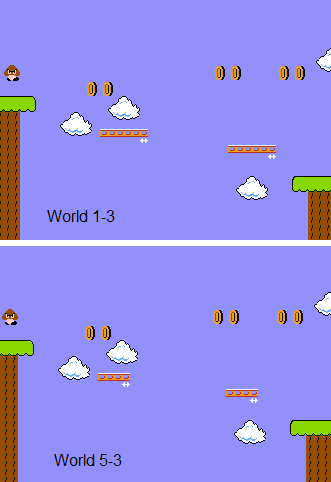 Spot the difference...Answer  The moving platforms are shorter in 5-3.
So, you've finally beaten World 4 of your 8-World game! You're halfway done!
Advertisement:

Wait... why does World 5 look exactly like World 1? And why are all the enemies replaced with harder, faster ones? And the time limit's smaller, too! And, what the heck, your HP Cap is lower?? What's going on here?!

Welcome to the Hard Mode Filler. Unlike a standard difficulty setting, this is when a game forces you to replay something earlier at a harder difficulty during the same playthrough. It also counts if the game doesn't actually give you an ending after beating an easier difficulty, instead just unlocking a harder difficulty which the end of the game lies behind. Sometimes it shows you interesting new dimensions behind older levels, while other times it is simply a case of the developers being lazy and not wanting to design more levels.

Compare New Game+, where this happens to the entire game after the first playthrough is over. See also Where It All Began, when you have to return to an earlier area as part of the story. Sometimes a Boss Rush works the same way, but you're only redoing the bosses. If an entire overworld is duplicated to get a more difficult (and usually darker-themed) version, it's a Dark World.