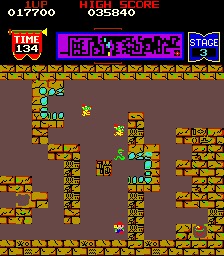 Tutankham is a 1982 dungeon-crawling game by Konami, licensed in the United States by Stern Electronics. Legend has it that the game was supposed to be titled 'Tutankhamun', but the last two letters didn't fit on the arcade cabinet.

The player explores a tomb to find hidden treasure, while fending off endless waves of enemies with a laser gun which can only fire horizontally. The treasures are a map, a sacred urn, a treasure chest, and King Tut's death mask.

Though not one of Konami's more popular arcade games, it was ported by Parker Brothers to many platforms, including the Atari 2600, VIC-20, Intellivision and Colecovision. Parker Brothers also made prototype versions for the Odyssey², Atari 8-Bit Computers and TI-99 that went unreleased due to The Great Video Game Crash of 1983 that removed them from the video game industry.