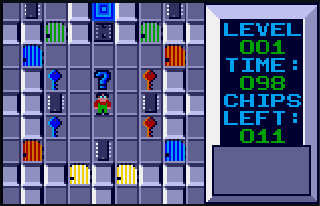 The things a nerd will do for love...
"Their eyes met across the laboratory... the chemistry was instantaneous! But is Chip man enough to get into Melinda's club?"
— Magazine ad
Advertisement:

Chip's Challenge is a game originally created by Chuck Sommerville of Epyx for the Atari Lynx but later ported to various platforms, most notably Microsoft Windows via Microsoft Entertainment Pack 4 and Best of Microsoft Entertainment Pack (there were also plans for a Nintendo Entertainment System version, but they were dropped). It involves the eponymous hero, Chip McCallahan, who has met Melinda the Mental Marvel in the school science laboratory and must navigate through Melinda's "Clubhouse" (a series of 149 increasingly difficult puzzles) in order to prove himself and gain membership to the very exclusive Bit Buster Club.

The gameplay involves Chip moving about a number of tile-based 2D levels involving things like cloning machines, ice and force floor puzzles, and various monsters, attempting to finish a level before the time limit runs out. A sequel was produced, adding numerous gameplay elements, but due to legal issues remained unreleased for over 15 years. It was finally released

Fans have created several Level Editors for the first game, with which thousands of additional levels have been created. Some of the most well-received of these were assembled into the Fan Sequels CCLP1, CCLP2, CCLP3 and CCLP4 (CCLP short for "Chip's Challenge Level Pack"). The official sequel also saw its own fanmade followup in October 2020.

Per The Wiki Rule, there is a wiki

dedicated to the two official games as well as the fan-made packs.