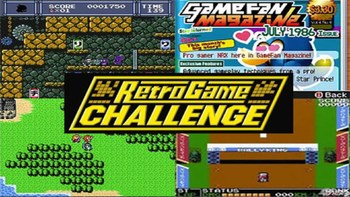 Retro Game Challenge (a.k.a. GameCenter CX: Arino's Challenge) is a Nintendo DS game based on the Japanese TV series Retro Game Master. In the game, your character is pulled back in time to The '80s and the childhood of one Shinya Arino (based on the host of the show himself), and are tasked with meeting the challenges of his evil-self-from-the-present, Game Master Arino, by playing eight different 8-bit games, which emulate the style of actual Family Computer games of that time. Only then will you be able to return to your own world.

Each of the eight mini-games comes with its own fully colored and illustrated (in-game) manual, and Kid Arino will periodically buy game magazines that contain cheat codes (which you are allowed to use against his future self) that you can browse while playing.

The game was successful enough to get a DS sequel in 2009 and a 3DS one in 2014, but these were both released only in Japan. The first game's US release had absolutely no marketing, which led to poor sales there, though a Fan Translation is available

for the second game.

Styles emulated by the mini-games: