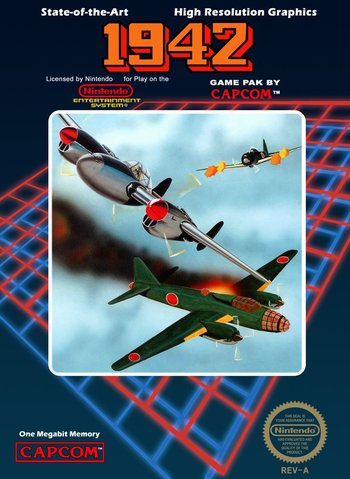 Defeat the IJN while listening to the March of Midway on repeat for about an hour.
Advertisement:

The 1942 series is a series of arcade vertical-scrolling Shoot Em Ups developed by Capcom, set mainly in World War II. The player is an American "Super Ace" in a P-38 Lightning who spends a surprising amount of time kicking the spit out of the Imperial Japanese Navy for a series made in Japan.

Do not confuse with Battlefield 1942, which is a whole different ballgame, 1941, Strikers 1945 (despite that also being a shmup series), or (heaven forbid) 1984. Also has nothing to do with the video game company Midway Games.note The "Midway" referred to here is Midway Island, which was part of the Pacific Theater of World War II.

Incredibly, this sole Capcom series has its own wiki

The 1942 series contains examples of: