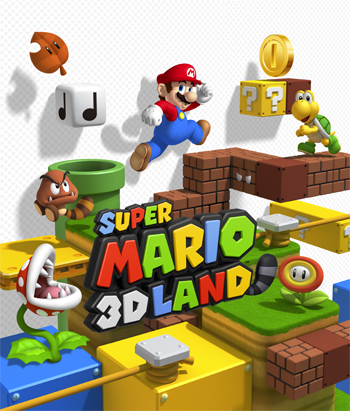 An all new dimension in the classic Mario platforming land.
Advertisement:

Super Mario 3D Land is a 3D Mario platformer that came out in November 2011 for the Nintendo 3DS (retail version; as of 2012 the game is available from the Nintendo eShop as well). Unlike earlier 3D Mario games, the style of 3D Land is essentially a blend between 2D and 3D Mario. Many elements, from linear level structure to Super Mushroom-based health to old-school power-ups like the Tanooki Suit, have been implemented into the 3D games for the first time. It's best described by Shigeru Miyamoto himself as "...more like a 3D Mario that plays like a 2D Mario game."

The premise is that a tree full of Tanooki Leaves is stripped of its leaves in a violent storm. When Mario and some Toads check the tree on the next day, they receive a letter from Bowser that he captured Peach again. His minions have also used the Tanooki Leaves to gain flying and spinning powers. Mario then sets off to save the day once more.

Despite the name, this has nothing to do with the Game Boy game or that series as a whole beyond being a part of the same overall franchise.