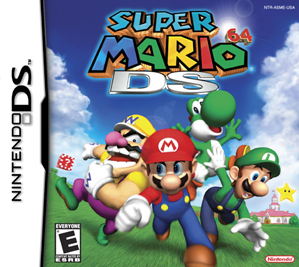 "New Super Mario Bros. U Deluxe, a title which consists of three adjectives, a letter that refers to a console the game is not for, the instantly recognizable name of an internationally famous video game character, and the word 'Bros.'"
—jan Misali, "how many Super Mario games are there?"

Some Video Games have titles that indicate, in some form or another, a system that they are available on. Usually, the publisher does this by taking a part of that system's name and slapping it on the game title as a prefix or suffix. Not always, though.

Note that this just indicates that it's on that system, not that it's exclusive, or even originally made for it. Indeed, games or series that travel to a new system are the most likely to pick this up.

If the platform prefix supposedly refers to something within the game, it's a Justified Title. Sometimes when the game is a sequel or continuation of the original title in a different system, it may double as a Lettered Sequel.

Fans also like to add platform-identifying labels to differentiate games that have Recycled Titles and/or the same name as their series. Castlevania 64, Superman 64 and God of War (PS4) are Fan Nicknames instead of true examples of this trope.

Nintendo has allowed this the most on their systems, so this practice is largely associated with them. They essentially named the trope, due to subtitles for games on the Super NES, Nintendo 64, and Game Boy Advance.

A Sub-Trope of Stock Subtitle.