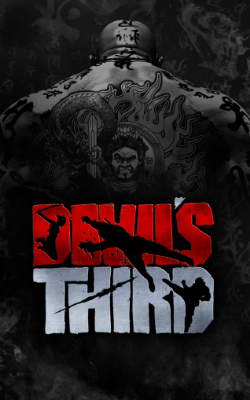 Devil's Third is a third-person action game for the Wii U developed by Valhalla Game Studios. The game is the brainchild of Tomonobu Itagaki, the outspoken director of franchises such as Dead or Alive and Ninja Gaiden. The game released on August 4th, 2015 in Japan, August 28th in Europe, and December 11th in North America.

Players take the role of a lone wolf special operations soldier known as "Ivan". The setting of the game takes place after a catastrophic event called the ""Kessler Effect

" has come to pass, stripping the world of satellite communication and causing changes in both greater civilization and warfare in order to adapt to the technological regression. In this chaos, a former Soviet general, Isaac Kumano, has created a terrorist organization, the School of Democracy, to bring about peace by rebelling against the world and killing everyone who they consider an enemy to that peace. Ivan must take it upon himself to stop the madman.

Devil's Third is a unique experience among action games as it is a Third-Person Shooter, a Beat 'em Up, and a Hack and Slash game all in the same package. Ivan is able to use firearms, bladed weapons, and his fists to dispatch enemies in a seamless frenzy of violence. The game includes both a single player campaign and a multiplayer mode, complete with a custom map editor.

and the launch trailer here

Following a long troubled production that took the title from an Xbox 360 exclusive, to a multiplatform game, and finally to a Nintendo exclusive, the game received mixed reception from critics and players alike upon its release. Reception was particularly negative in the West, with reviews noting several issues such as mediocre graphics, inconsistent framerate, poor controls, and manipulative use of microtransactions in online play. This wasn't aided by Nintendo of America's reluctance to publish the game in that region due to its (lack of) quality, with the title being removed from the American eShop's "Coming Soon" section and its absence at E3 2015. However, backlash eventually pushed them to publish the title, albeit in limited quantities.note Retail copies were exclusive to GameStop, with the chain only receiving 420 copies for the entire United States. As a side note, even the Japan retail release was exclusive to Amazon. Shortly after the game's release, it was announced that the multiplayer servers would be shut down in all regions at the end of 2016, due to poor sales.

The game's online multiplayer mode was released on PC in Japan as the standalone Devil's Third Online in June 2016, with new features such as voice chat, but this was also shut down in March 2017. However, the multiplayer mode received a spiritual successor in the form of the free-to-play game RockShot (developed by the same studio