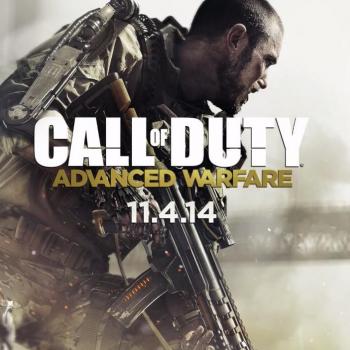 Power Changes Everything
"People don’t want freedom. They want boundaries, rules. Protection. From invaders and from themselves. People need a leader who can give them both the support and the constraints to keep chaos at bay. You give them that, and they'll follow... And that's where I come in."
— Jonathan Irons, Reveal Trailer

Call of Duty: Advanced Warfare is a First-Person Shooter entry in the Call of Duty series, developed by Sledgehammer Games and released in November 2014 for the PC, PlayStation 4, PlayStation 3, Xbox One, and Xbox 360.

It's intended as the spiritual successor to the Modern Warfare series, though the story it tells is unrelated and set in a new continuity. The game was developed by Sledgehammer Games, who took over development of Call of Duty: Modern Warfare 3 after the infamous troubles between Infinity Ward and Activision.

In 2055, a terrorist organization known as the KVA initiates the first global terrorist attack in history by simultaneously destroying the nuclear reactors of developed countries around the globe, including the United States. Across five continents, many countries' military and government infrastructure including electricity and technology were devastated and incapable of fighting the threat posed by the KVA. As the result, private military corporations (PMCs) have become the dominant armed forces for countless nations and represent the first line of defense against this new enemy.

Jack Mitchell (Troy Baker), a former U.S. Marine who lost his left arm during the battle of Seoul, joins Atlas Corporation, the world's most powerful private military company with the most advanced technologies on the planet, which is run by Jonathan Irons (Kevin Spacey). Executing clandestine operations across the globe for the highest bidder, Mitchell and his Atlas team seek to destroy the KVA and restore order to the world, but everything changes when they uncover the dark secret of Atlas.

Tropes appearing in the game include: