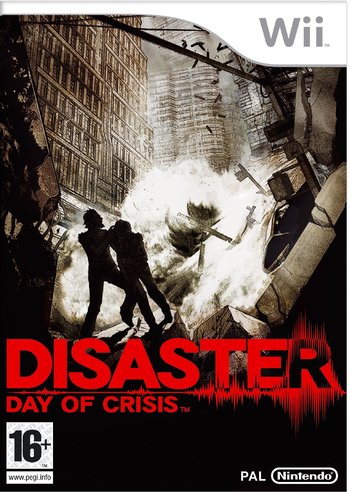 Disaster: Day of Crisis is a 2008 Wii-exclusive game, mixing exploration, shooting sessions and QTE for a compilation of every disaster movie ever.

Raymond Bryce, the hero, is a former US Marine and International Rescue Team member who quit his last job after the death of his teammate and best friend Steve during a rescue mission. However, when he gets contacted by special agent Olson who reveals to him that his friend's sister has been kidnapped by a rogue military force which also stole several nuclear warheads, he agrees to go on investigation and to rescue her. Unfortunately, he'll also have to face an unusual series of natural disasters which all spontaneously occur during his mission...

The game goes to great lengths to make the player feel the utter chaos of the situation, as well as keeping them busy by frequently switching the gameplay.

Not to be confused with Disaster Report, an earlier game that also dealt with natural disasters.