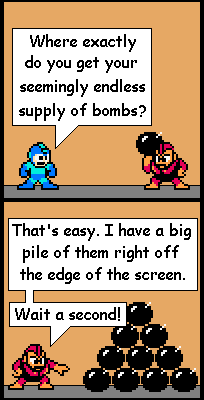 Redcloak: So why the Southern Mountains, sir?
Xykon: I keep a back-up fortress here, just in case.
— The Order of the Stick #148

The evil counterpart to Infinite Supplies.

We know how it goes. The good guy defeats the villain. Whatever the villain stole is returned, and his Doomsday Device is blown up. Every single time.

Yet, time after time again, the villain is right back at it again next week, his Evil Minions at the ready. (Apparently their paychecks have not bounced.)

How on earth does he fund this? Why does anyone take him seriously anymore? The only possible explanation is that there are scores of successful operations the villain is undertaking, even though we never see them. Much like how scientists speculate that the universe is filled with "dark matter" note substances that can't be directly observed, but whose presence can be inferred from their gravitational effect on galaxies, we speculate that the villain's resources are vast and unseen.

It should be noted that this trope can also be used by the hero, if the writer needs to explain how they're Crimefighting with Cash. Since the heroes can't necessarily spare the time to go out and make money themselves, having a convenient source of funds being run by someone else frees them up to do things the audience enjoys.

See also No Delays for the Wicked and Missing Steps Plan. Contrast with Mook Depletion and No Plans, No Prototype, No Backup. Not to be confused with a certain villain named Dark Matter. Forgot to Feed the Monster is a subversion.

See also Not Playing Fair With Resources for Video Games.