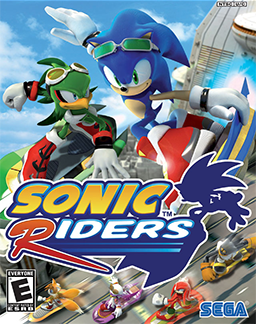 Try to Keep Up!
"Even without wings, I can still fly!"
— Sonic the Hedgehog
Advertisement:

A Spinoff series of Sonic the Hedgehog, Sonic Riders is a console Racing Game series involving hoverboard racing. Started in 2006, it stars Sonic and his pals as they meet a new Power Trio of characters known as the Babylon Rogues, composed of Jet the Hawk, Wave the Swallow, and Storm the Albatross. Together, they race at high speed using devices known as Extreme Gear.

As of 2022, there are 3 games in the series - Sonic Riders (for GameCube, PlayStation 2, and Xbox), Sonic Riders: Zero Gravity (for Wii and PlayStation 2), and Sonic Free Riders (only for Xbox 360).