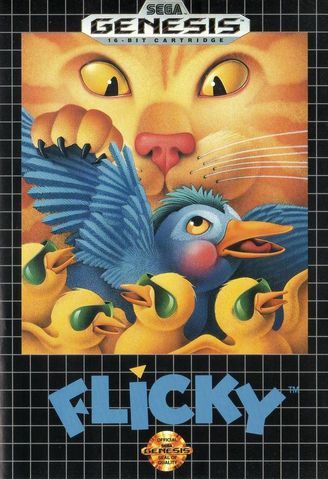 A game made by Sega and released in 1984 for arcades and Sega's SG-1000 console, and subsequently ported to several computers and the Sega Genesis. It predates Sonic by seven years but was designed by a future member of Sonic Team, namely Youji Ishii. It also inspired the Sonic game Sonic 3D: Flickies' Island (known as Sonic 3D Blast in North America).

The player's objective in each round is to run around as Flicky, collecting all of the Chirps in the stage, and then to run to the exit. The enemies Tiger and Iggy will try to scare away the Chirps and hurt Flicky. If that sounds familiar, then it's no surprise that the game was heavy influenced by Namco's earlier game Mappy.

This game contains examples of these tropes: