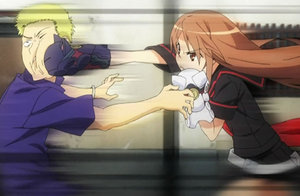 She'll leave you cat-atonic (even if she's supposed to be the big bad wolf).
Atrocitus: You appear feeble.
Supergirl: I punch above my weight.
— Injustice 2
Advertisement:

Like the Old Master, the Cute Bruiser is a living, breathing, and frequently painful lesson in never judging a book by its cover.

She appears to be a kid, but in battle she fights like a bruiser. Bruisers tend to melee combat focused on punches and blocks. Traditional bruisers are large husky men who win fights due to their size and strength allowing them to both absorb and put out heavy damage. This contrast between appearance and combat style is what makes the character surprising.

The Cute Bruiser's Weapon of Choice will probably be Good Old Fisticuffs, a club, or martial arts that focus on direct blows to your opponent instead of pressure points or judo throws. They'll only rarely be using a bladed weapon (unless it's a BFS of some variety) or depending on projectile weapons, with the exception of throwing heavy objects. When confronted with a locked door, her likely solution is to just smash it open. In short, she deals out the blunt trauma very well.

The Cute Bruiser also has some tanking abilities. She is not a Glass Cannon who depends on dodging. (Dodging is acceptable behavior, but a Cute Bruiser can take a blow if needed, and so doesn't depend on it). At the end of a fight expect her to be covered in bruises and scratches, but still with a smile on her face, (assuming the fight was won). She might even be Rock steady, hitting like a Mighty Glacier, and standing like a Stone Wall. Might have Super Strength as justification.

She is usually The Big Guy in a Five-Man Band, a common subversion of the usual traits associated with that character type. Personality-wise she can vary quite a bit. She might be a Boisterous Bruiser, she could share some traits with a Little Miss Snarker, or she may just stick with the apparent contradiction of an innocent Cheerful Child who can mix it up in a bar fight. If she is affiliated with a powerful villain, expect to see just how someone with her appearance got to that position.

Almost always a Pint-Sized Powerhouse. Possibly a Super-Strong Child, in which case she may be a Glacier Waif. When she works out enough, she can evolve into an Amazonian Beauty; a Cute Bruiser typically has toned muscles, but her muscles are always on the leaner side. If she retains her cute looks well into adulthood, even after she becomes a mother, she becomes an Action Mom. When past the age of cuteness she usually disappears as a character before re-emerging in old age as a case of Never Mess with Granny. If she deliberately plays up the "cute" aspect to get people to drop their guard, this can overlap with The Fake Cutie. Despite what this entry may suggest, this is not an Always Female trope; a young boy who can punch far above his weight would also qualify.

Compare Child Mage and Waif-Fu, which have a similar contrast between appearance and combat effectiveness but using a different combat style. Contrast with the Lady of War who is elegant in combat.