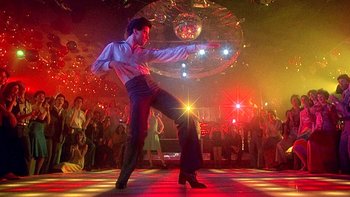 Nobody by day, king of the dancefloor by night.
"You can see as she catches a train
Just a face among a million faces
Just another woman with no name
Not the girl you'd remember but she's still something special
If you knew her, I am sure you'd agree
'Cause I know she's got a little secret
Friday evening she turns out to be...
Nina, pretty ballerina
Now she is the queen of the dancing floor..."
— ABBA, "Nina, Pretty Ballerina", Ring Ring
Advertisement:

There are some people that are masters in many things that others find impossible to learn; painting, singing, and other things in the creative arts. But these masters aren't always the masters of everything. They can hardly attract the attention of strangers with their skills and others don't find them really impressive.

That's not the case with members of the Dancing Royalty.

These are the usually the characters that suck at everything else in life, but really come alive on the dancefloor. Their moves wow the crowd and leave them in a stunned silence, who dare not to defy them.

Also, expect the character to be hated by many. This can lead to many patronising nicknames, like "The Master of Dance" or the "Dancing King/Queen" that the person may/may not like. In some cases, they may only have one hater, who might dare to challenge them to a Dance-Off, much to the annoyance of the Royalty's audience.

The Dancing Royalty themselves can have certain personalities. They can be modest about their talent and just blame it on being Graceful in Their Element, but are flattered by the attention — especially from attractive fans. Outside of dancing, they might be terrible at everyday things, or they might have No Social Skills, be very shy or might be very clumsy.

On the flip side, the Dancing Royalty can be self-centered, obnoxious and smug about the attention. Although the crowd jealously watch on, they might live in fear and only give the Royalty special treatment to be nice and not get on the wrong side of them. This kind of Royal is more likely to be the tyrant who bullies others and shamelessly dares others to have a dance-off, knowing that they'll easily beat them.

You're most likely to find this character mostly in music, typically the disco-era, but it can be found in other media too.

The trope namer and codifier is ABBA's "Dancing Queen". It doesn't refer to dancers who also happen to be royalty, although an example may also play the royalty part of the name literally in addition to fulfilling the actual trope. Contrast Graceful in Their Element, which is sort of the same similar idea. Can also be the Life of the Party.