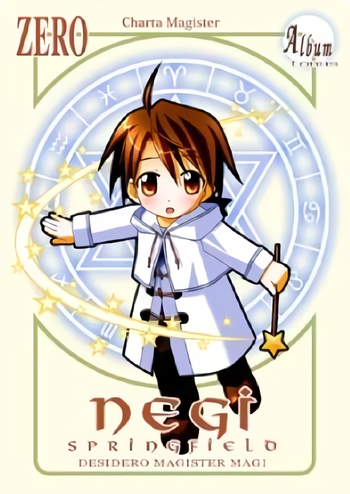 The main magic user in the game or story happens to be the youngest person in the group. Possibly because the story writer wants to have a character that young for comic or dramatic effect (or just for sheer cuteness) and can't imagine said character being proficient in a sword or other conventional weapons, so they let them summon meteors with their mind. It also provides a convenient justification for keeping the mage squishy; they don't have the raw strength to move around in heavy armor. In any case, the implication is that either magic is just that easy, or they're just that good.

There's also the old standby that children have more magic potential than adults, presumably tied to their imagination/innocence/not-being-attached-to-the-mundane. As such, there's always a chance of Growing Up Sucks for a mage, as they may lose some of their power (or power growth) upon reaching adulthood.

This trope extends towards the Little People sometimes, as well, considering many have a child-like appearance (or even mannerisms). Just don't say that to the dwarves.

See also Tyke-Bomb, which is not necessarily a magic user, and Squishy Wizard, which a Child Mage is almost guaranteed to be, or Magical Girl, when a Child Mage is a cute little girl with fancy magic and outfits, or Cute Bruiser, when the character actually does have physical prowess instead of magic, despite their size, and Goo-Goo-Godlike, for a character even younger (specifically, they are infants) and more precocious than the Child Mage. Compare Teen Genius for the sci-fi equivalent.

If they have psychic abilities instead of magic it's Psychic Children.