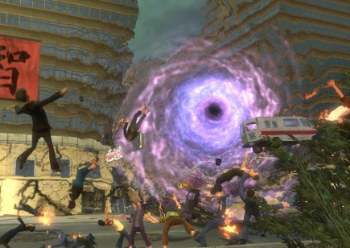 It won't destroy the world, but it still sucks.
Beavis: Hey, Butthead. What is a black hole?
Butthead: So like, a black hole is like, this giant bunghole in outer space. It's like, it sucks up the whole universe, and then it's like, it grinds it up and sends it all to Hell or something.
— Beavis and Butt-Head, while watching the music video for "Black Hole Sun"
Advertisement:

Black holes. They're the most terrifying things in the known universe. They're huge masses of... well, nothing (but they do have a lot of mass); and nothing, not even light, can travel fast enough to escape them.note A black hole is any object which has an escape velocity that is greater than the speed of light. The event horizon (or Schwarzschild radius) is the boundary within which this condition is met. Unfortunate items which do fall in are spaghettified

the black hole ripping individual molecules apart. But that's only if you get too close. From far away enough, in a stable orbit, being near a black hole would just be the same as orbiting a massive, invisiblenote  The gravitational lensing effect is hard to overlook so the black hole would appear as a silhouette against the stars — see the Other Wiki for a simulation thereof. And then Hawking's radiation would actually make the thing pretty bright. star, only the black hole would be much smaller.note For a nice size comparison, see this video.

For example, if the sun were to suddenly be magically converted into a black hole of the same mass, the earth's orbit would continue on exactly as before, completely unaffected (gravitationally, that is — the lack of heat and light would, of course, rapidly end almost all life).

... Unless it's fiction. Sometimes they just suck in everything around them like giant space-vacuum-cleaners, seeing as Gravity Sucks. This can range from whole planets to just the Big Bad of the story (and in those cases, the black hole conveniently closes after swallowing him). Also commonly, a black hole will be represented as an actual hole in space and it will be perfectly possible to enter a black hole and leave it safely. Sometimes a black hole will be completely flat, apparently forgetting that our universe is 3D. Relativistic time dilation tends to be ignored; a character voyaging into a black hole can leave it without time warping, while those outside can see things enter a black hole without slowing to a crawl. Hovering black holes are often seen as weapons. Also, if a black hole forms during the story, expect its gravitational pull to instantly skyrocket instead of remaining the same as the pull of the star that collapsed to form it. Of course it will be completely insane for anything to be orbiting it, despite the fact that we are orbiting a black hole right now.

A subtrope of Space Is Magic — indeed, if the canon in question has magic then that's your Hand Wave for getting away with this trope. For a similar, more terrestrial example, see Do Not Touch the Funnel Cloud. When the black hole is used as a method of travel, see Our Wormholes Are Different. Very commonly used as a Negative Space Wedgie. Often involved in a Spaceship Slingshot Stunt.

Note that for decades, the exact appearance of a black hole was solely a theoretical and artistic undertaking, constantly changing and shifting in line with the emergence of new scientific theories and shifting schools of thought. On April 10, 2019, the first ever image of a black hole

was released to the public. It was undertaken by the Event Horizon Telescope and a globally collaborative scientific undertaking by multiple universities across the world. This was followed up by the May 12, 2022 release of a photograph

in the Galactic Center of the Milky Way galaxy, showing that it too contains a black hole.