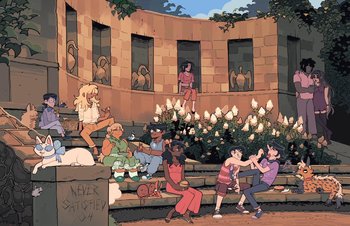 Never Satisfied is an on-going webcomic about Lucy Marlowe, a magician's apprentice competing against other apprentices for an important magical government position, dealing with issues of privilege, interpersonal differences and how hard it can be to understand others. Though it focused nearly exclusively on Lucy in its inception, it's since expanded to cover a broader narrative woven from nearly the entire speaking cast's personal arcs.

A Monday/Friday webcomic by Taylor Robin, better known as Corny, running since April 2015 and winner of Comics Alliance's Best New Comic of 2015

to print the first five chapters that raised $28,186. It can be read here.

open/close all folders
Tropes A to I
Tropes J to Q
Tropes R to Z
Advertisement: